"Maru" is the pavilion which Kazuyo Sejima + Ryue Nishizawa /SANAA planned and built to commemorate the 10th anniversary of the 21st Century Museum of Contemporary Art, Kanazawa, which they also designed.

Commemorating the 10th anniversary of the 21st Century Museum of Contemporary Art, Kanazawa in 2014, Kazuyo Sejima + Ryue Nishizawa/SANAA designed this new symbol ""Maru."" ""Maru"" is an artwork made from sixteen 1.8m-diameter stainless mirror balls, and has become a new landmark at the art museum.

We had only a 3D drawing and 1/10 sized model as design/production references. Using these references, we read the designer's intention and had to convert the design to a feasible production drawing. In this case, it's a beautifully polished artwork, but there are two sections which are welded. So it was quite difficult to keep these contradicting aspects nicely. SANAA+Arup+Takenaka Corporation+Hokkai Manufacturing Co., Ltd. repeatedly had discussions to figure out the best course to take.

First, as a trial, we made 2 half-balls out of 16 balls, then welded and applied mirror finishing of the same quality as in actual production. As a result, we established a production procedure of splitting, pressing, welding, and applying finishing on 5 parts per one half ball. We also set procedures for mirror finishing, which is buffing the whole part twice at the factory, and twice more at the actual site. It's rare to apply repeated polishing to an ordinary artwork. So we expected this project would require continuous care through its completion. 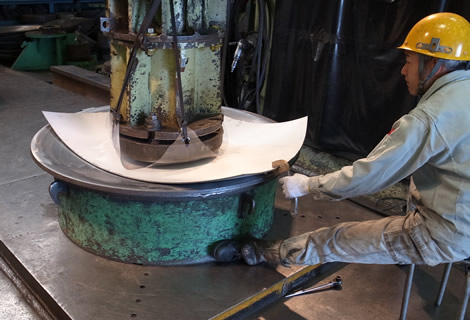 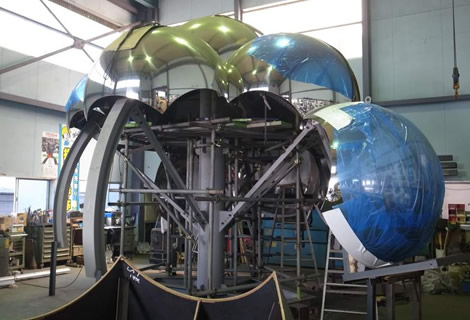 Production at the factory

We decided to split each ball into seven to move them by truck to the installation site. Because factory conditions are better for this work, we did as much as possible of the welding and initial finishing work in the factory. Then we repeatedly checked the 3-dimensional sections such as the ball-to-ball attachments and ball-to-pillar connection elements which were difficult to describe in the drawings, using the 3DCAD in advance. We spent quite a long time considering the fixtures for assembling and cutting. During construction, for sections which were difficult to make, we made partial mock-up models and checked them at the actual site to receive the designer's approval.

""Maru"" was placed above existing underground parking. So in approaching foundation work, we had to take care not to damage the parking structure. Excavations to the designated depth were done by hand. The foundation structure is a uniqe pentagonal shape, and the cross section size is 3.2 meters wide and 2. 3 meters deep. So production was quite difficult, and the stainless anchor to be embedded into the structure needed to be placed precisely. We met with builders to ensure that we could work efficiently. As a result, the concrete structure was placed precisely, and we moved smoothly on to the installation process.

We had to work while the museum was open, with large numbers of people around. This created an environment with a high risk for accidents. But keeping an eye on the schedule, we took safety measures with respect to the entry and departure of construction vehicles to and from the site, coordinating between the construction companies and our corporate office. We completed construction without accidents. 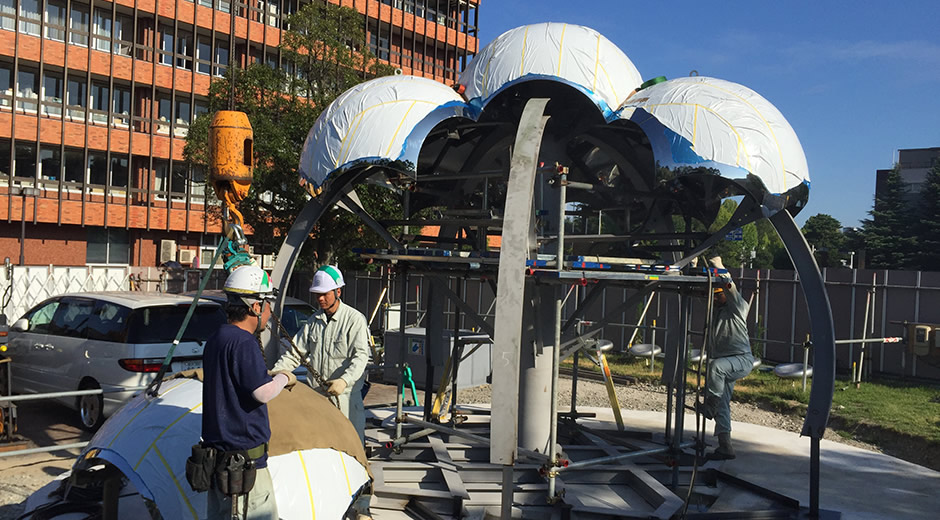 Installation of the artwork body

We began installing the artwork on August 17th, after the Japanese Obon summer holidays. Work took place in the blazing summer heat, and it was crucial to take measures against heat exhaustion. We began work early in the morning to aboid the worst of the heat, and we shaded the scaffolding with reed screens. But work was still difficult, because of the artwork's mirrored surfaces, which reflect sunlight.

But we had already completed initial assembly at the factory, and the onsite work went smoothly. We had been concerned about the welding process, but thanks to the versatile scaffolding, the work was done without problems, and the weld bead shape and inspection went well. In terms of the welding, we repeatedly inspected, finished the weld bead and buffed the mirror surface. It took about three weeks from the beginning of onsite work until the shape of ""Maru"" appeared. Afterward, we welded and inspected the pillars and added finishing touches. Fineally, we buffed the entire sculpture, and the work was done. From beginning to end, the work took about a month and a half.

The repetitive work of finding and fixing imperfections...the work seemed endless. When the scaffold was disassembled, and we saw the entire ""Maru"" for the first time, it seemed like a floating airship. The workers stayed onsite to watch it until the sunset. Finally, about a year after the initial material preparations, ""Maru"" was completed. 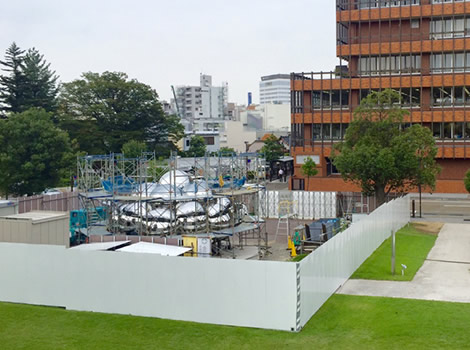 Involving artwork and architectural construction, the pavilion ""Maru"" became one of the special pieces we've been involved in producing. All 4 partues, the designers SANAA+Structural design company, Arup+Takenaka Corporation+Hokkai Manufacturing Co., Ltd. worked together in a perfect accord to produce this artwork. That was the project's best point. This piece couldn't have been made without mutual trust and passion.

Also, I wonder if it was because of the space of the 21st Century Museum of Contemporary Art, Kanazawa, or the region of Kanazawa which has merged cultures of art and craft, but all the workers involved with this project and installation felt wonderfully fulfilled. We hope Maru will reflect the scenery of Kanazawa forever.