“Under the Moon” at Nichi-Gatsu-en, Gatsuzoji Temple, Sakai City, Osaka

We want to make a graveyard where many people come together.

It can’t be a building, or be covered with a roof. But it mustn’t be just ornamental either. It was such a difficult order.

An innovative graveyard that breaks with convention.

The old Nichiren sect temple “Gatsuzoji” was established in 1495. The temple refashioned its graveyard, replacing the dark, lonely atmosphere with a bright, joint grave in a natural setting. Infix Design’s Yoshihiko Mamiya took charge of the general design. Waso-design, which works both in Japan and abroad, designed the garden while LEM Design Studio turned their wealth of experience to creating the lighting. From the initial planning, three and a half years went into producing this calming space, surrounded by trees and graced with its moon-shaped monument roof. In addition to being a space for graves and memorial ceremonies, the space is also used for occasional events including concerts. The steady stream of water into the large basin, reflecting the full moon and illuminated trees, creates a magical atmosphere.

I’m proud to say that the graveyard has become a place that makes people want to stop and visit on their way home from work.

The graveyard has become filled with the bright sound of laughter.

This was originally another temple’s graveyard. Over time, that temple disappeared, leaving behind only the graves. Three parishioners were tending the graves, but as they grew older or moved away, they were forced to stop. So our temple decided to take over the work.

In recent years we hear phrases like “dismantled or deserted graves” too often. I don’t like expressions like these, and I’d been thinking about making a joint grave with a brighter image. A graveyard without a dark, desolate image, but instead a cheerful atmosphere and frequent visitors. With that kind of image in mind, I met Mr. Yoshihiko Mamiya at Infix, a leading person in the space design industry. 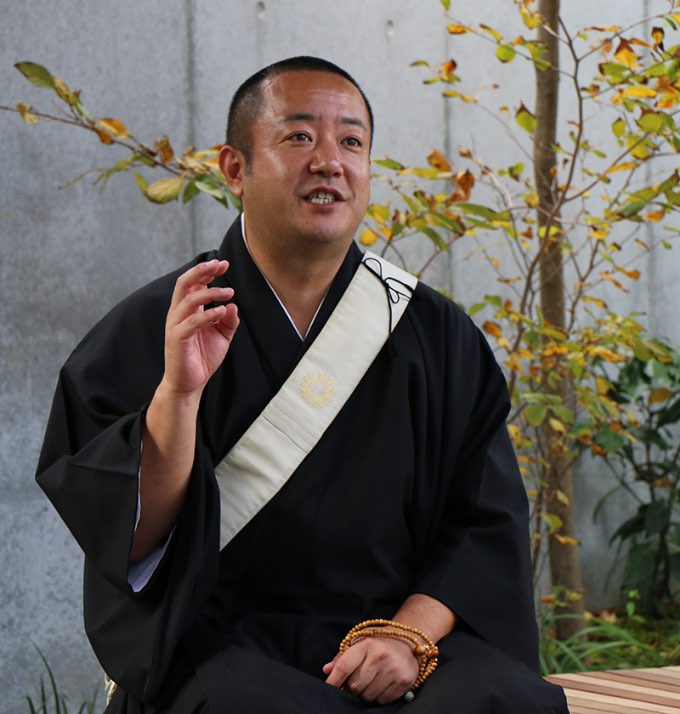 I simply explained to Mr. Mamiya that I wanted to fill the space with music and laughter. He put special effort into the design of the moon-shaped roof, made by Hokkai. The rest of the design went through changes right from the beginning, but this moon-shaped roof was built according to the original design, serving as a core around which the rest of the space was arranged.

After construction began, I felt rather lonely for a while, watching the changes. But when the moon-shaped roof was brought in, I could feel an excitement overtake me. I’m tremendously satisfied with it, both for its harmony with the surroundings and the way it lets people relax when they visit. It’s really become a wonderful spot. The water basin can be transformed into an event space just by stopping the water’s flow. We’re planning to hold a variety of events in addition to memorial ceremonies, like exhibitions and concerts, to attract people to the temple. 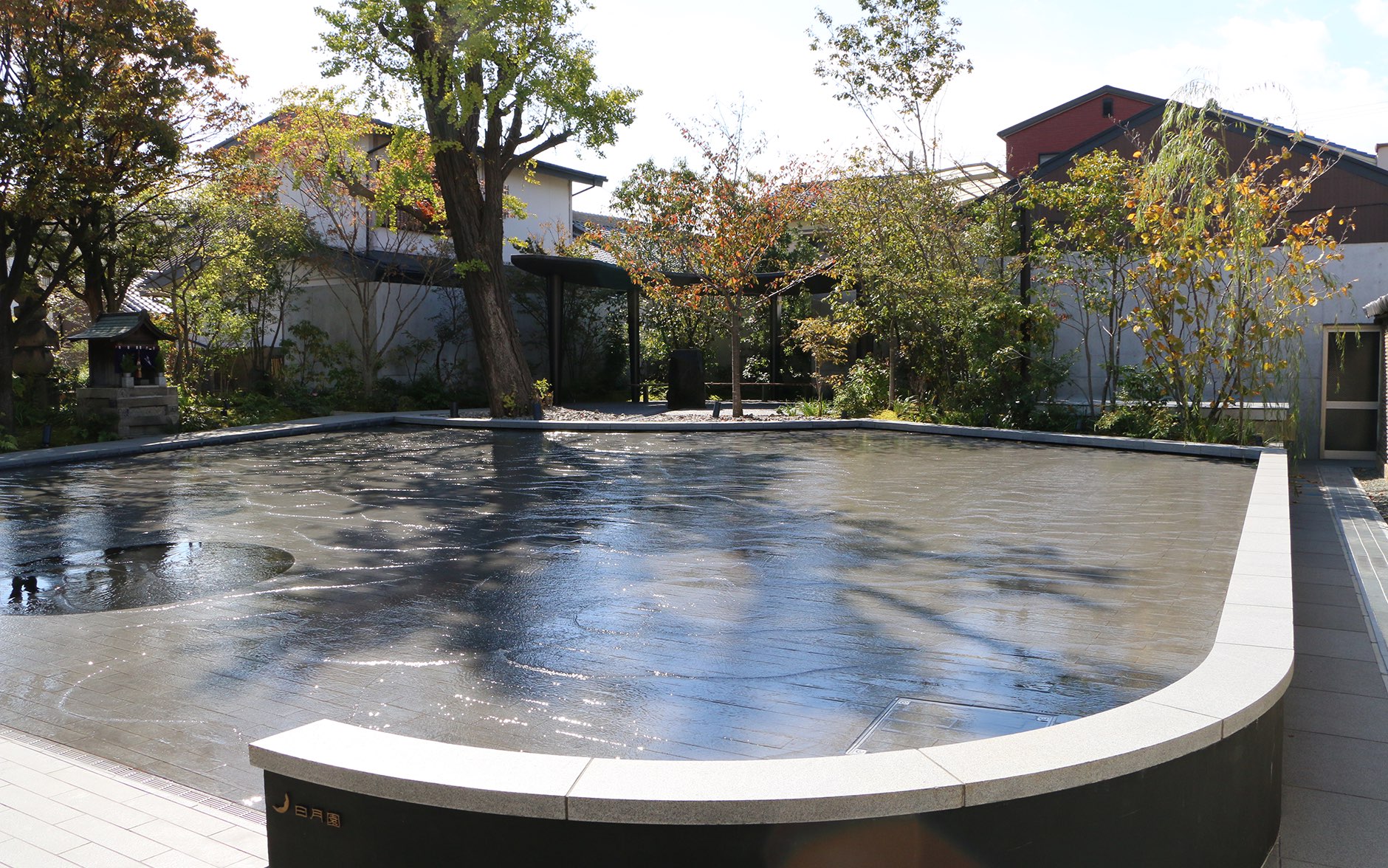 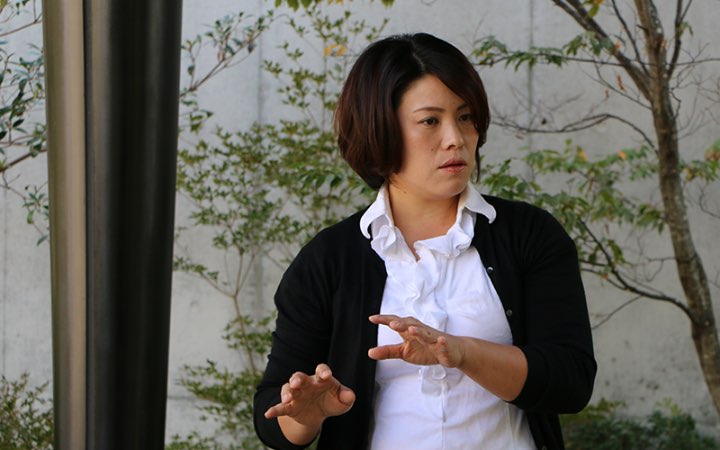 Our temple is open to visitors until 20:00. At night, the atmosphere is wondrous, with the moon reflecting on the water and the surrounding trees illuminated.

Graveyards are generally avoided at night, but modern lifestyles are different from how people once lived. So the temple and graveyard need to be updated too. The worshipers here agree with that way of thinking, and have been very supportive. I’m proud to say that our graveyard has become easier to visit, even for people dropping by after work. 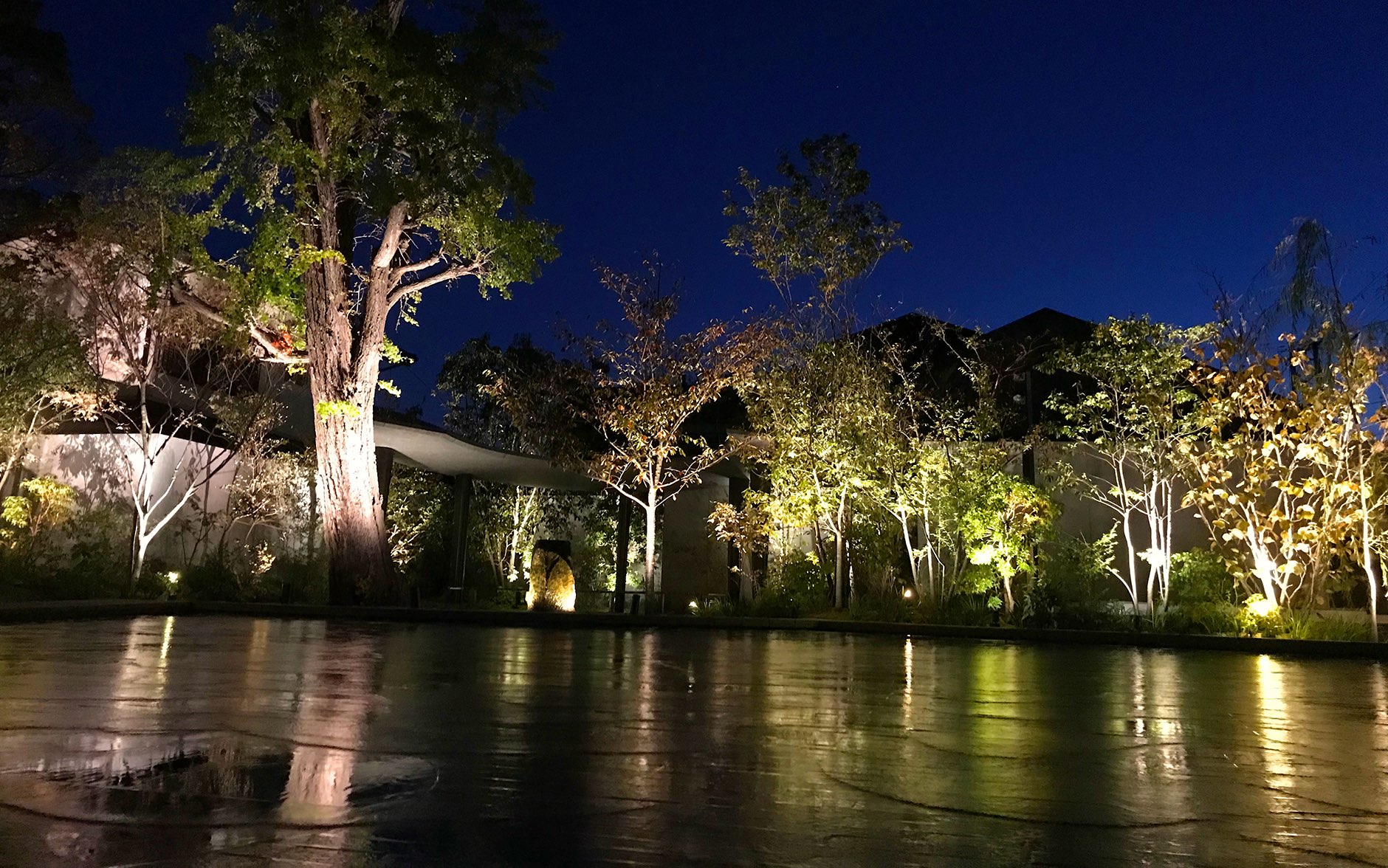 Origin of the name “Nichi-Gatsu-en”

Our temple has a connection with two samurai commanders on Lord Toyotomi's side. One is Ono Dokensai Harutane, who set fire to the town of Sakai on orders from his master during the Osaka Summer War. The other is Kazama Rokuemonnojo, who made efforts to restore the nearly-destroyed Sakai, dividing the town into blocks. One burned, the other restored. This temple accepted these two contrasting men, and so we named this place “Nichi (sun) Gatsu (moon) Garden. The symbolic moon-shaped roof also reflects the name. 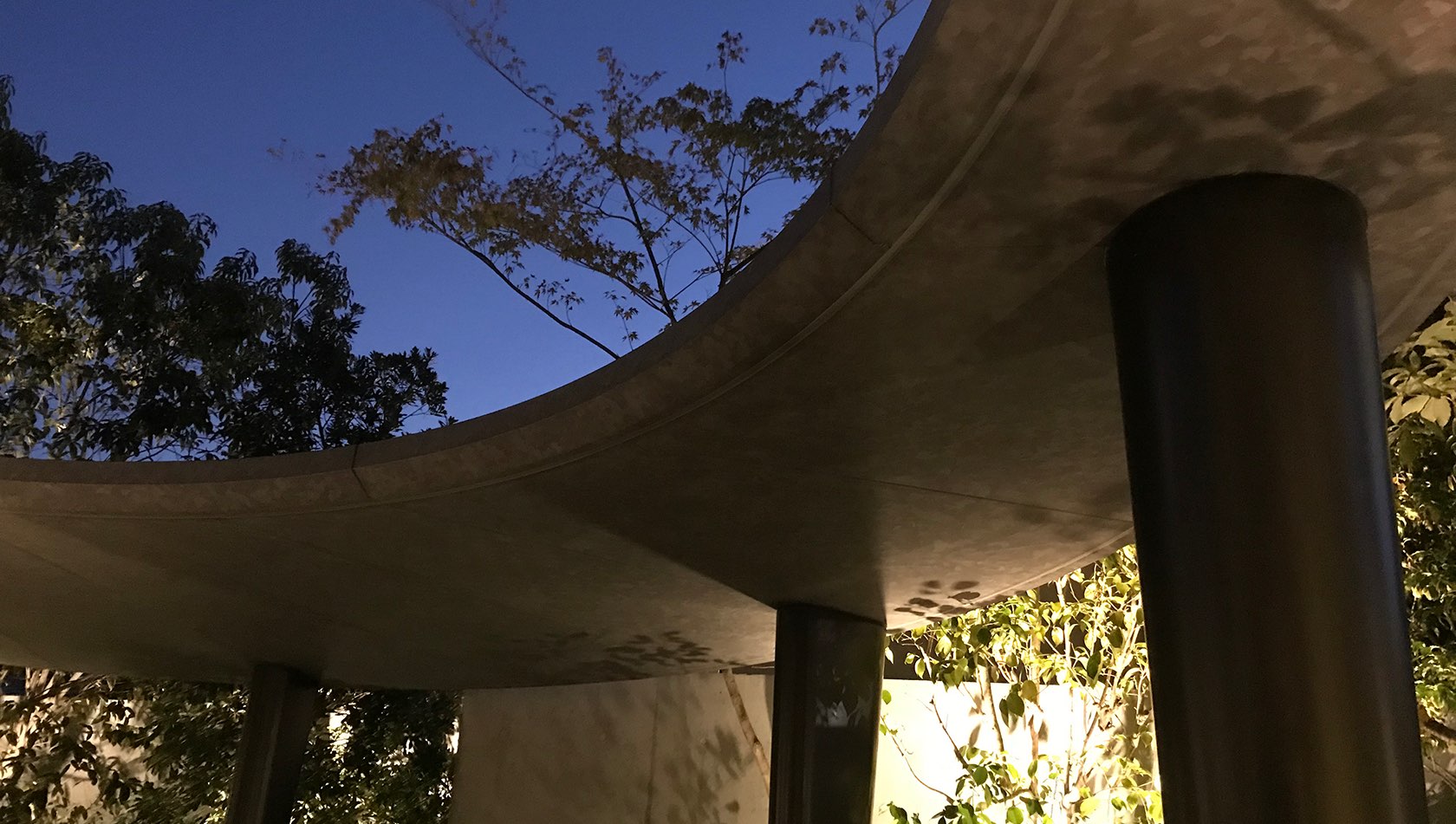 I was thinking about making something symbolic as a main component, instead of building a monument.
That turned out to be the moon-shaped roof that I asked Hokkai to make.

Consciously balancing the old and new

When Gatsuzoji said to me, “We want to make a graveyard where many people can come together,” I felt that the range of design is expanding rapidly these days. In addition to design orders from commercial facilities, residential and public spaces, I was being asked to create an original Buddhist altar. People are trying new things. 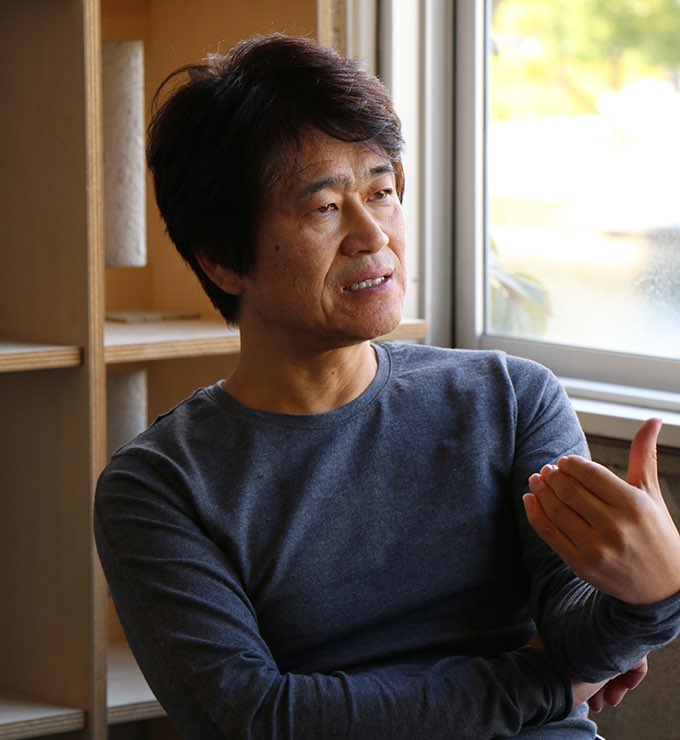 Gatsuzoji Temple is a historic temple. So I kept a large gingko tree and other good portions. But if I simply refurbish the temple, no one will come to see. To make a graveyard that people will want to visit, I had to think about how to make the space new. If it’s too unique, it will be jarring, so I had to keep a careful balance of old and new, and harmonize with the natural surroundings.

I also had a hard time working out the best design within the space constraints, such as the homes standing adjacent to the temple grounds. But that problem was solved by making a large water basin that could be used as an event space when the flow of water was stopped. The basin isn’t just for flowing water, but is designed with the image of a water village. The illuminated trees reflect in its surface, and it creates a really magical atmosphere. I think the graveyard has become a truly special place, that people will be comfortable visiting even at night. 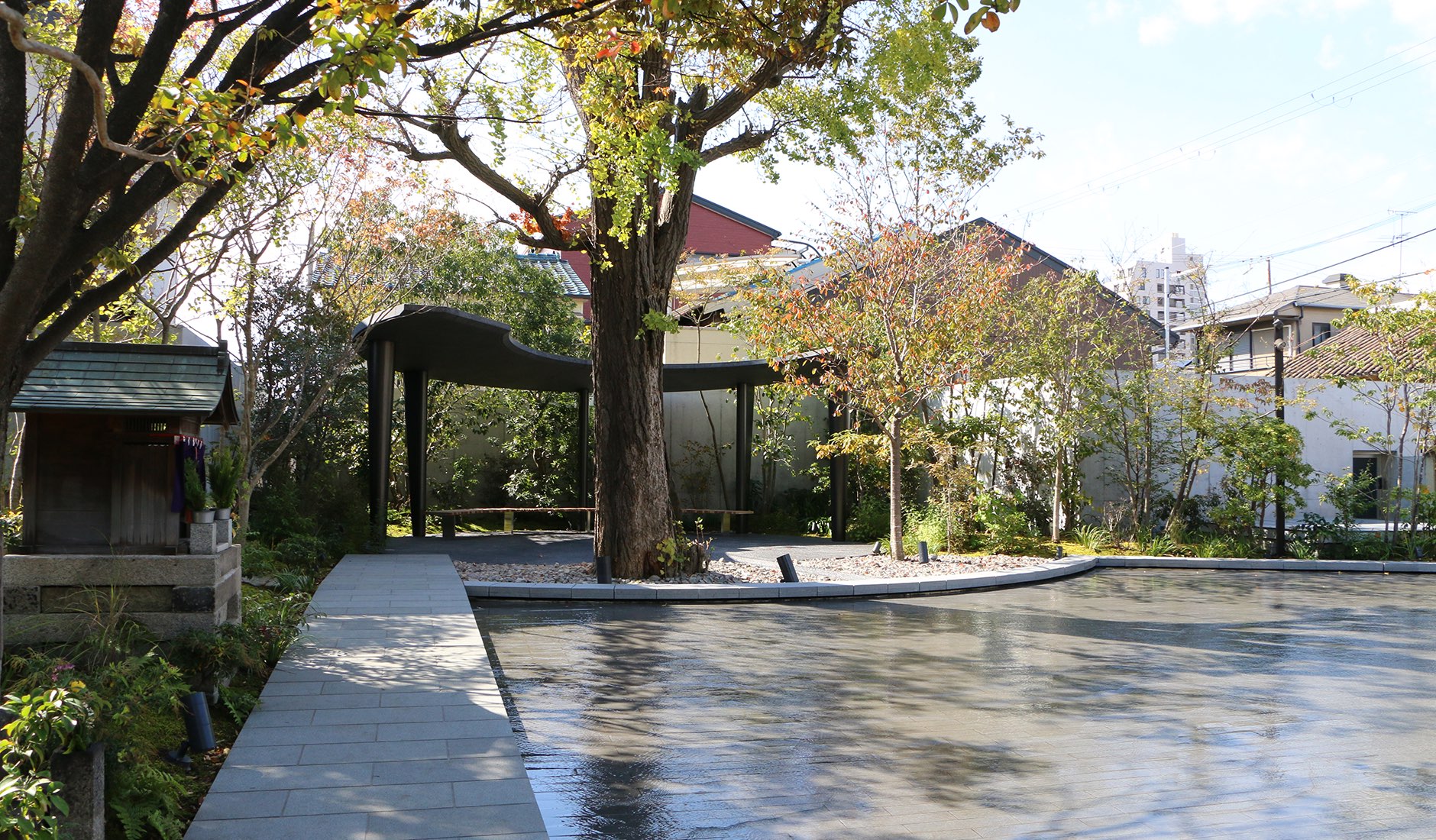 The graves are the focus. So I was thinking about making something symbolic as a main component, instead of installing a building-like monument. That’s the moon-shaped roof that I asked Hokkai to make. I drew a certain design for Hokkai, but I just passed a rough note of Gatsuzoji’s idea.

It can’t be a building, or be covered with a roof. But it mustn’t be just ornamental either. It was such a difficult order. However, Hokkai was willing to take our order and make exactly what I envisioned. I’ve worked with Hokkai for a long time, and their professionalism is consistently reliable. Their work is always top quality. 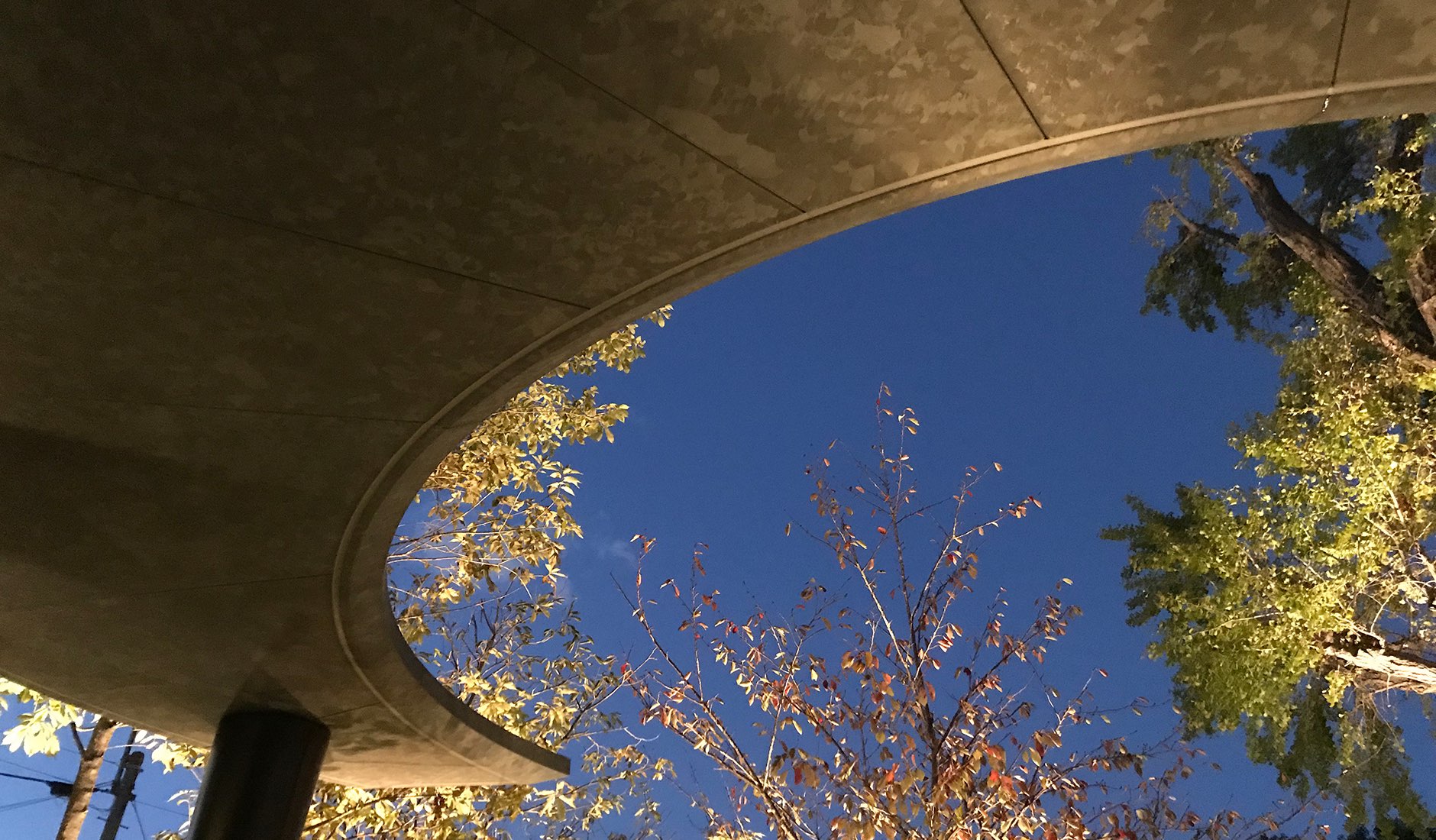 Designing the space with angle and materials

If the “Moon-shaped roof” is installed straight on, people won’t recognize the shape of the moon when viewing it from below. To allow people to recognize the moon shape from any vantage point, I took extreme care in choosing the angle of installation. The roof has a heavy image, so we gave the pillars a rounded shape to soften them. We also chose glossy material for the pillars.

In coming years, more and more people will choose their own graves before they die. I think this graveyard is leading the way, with interesting attractions. 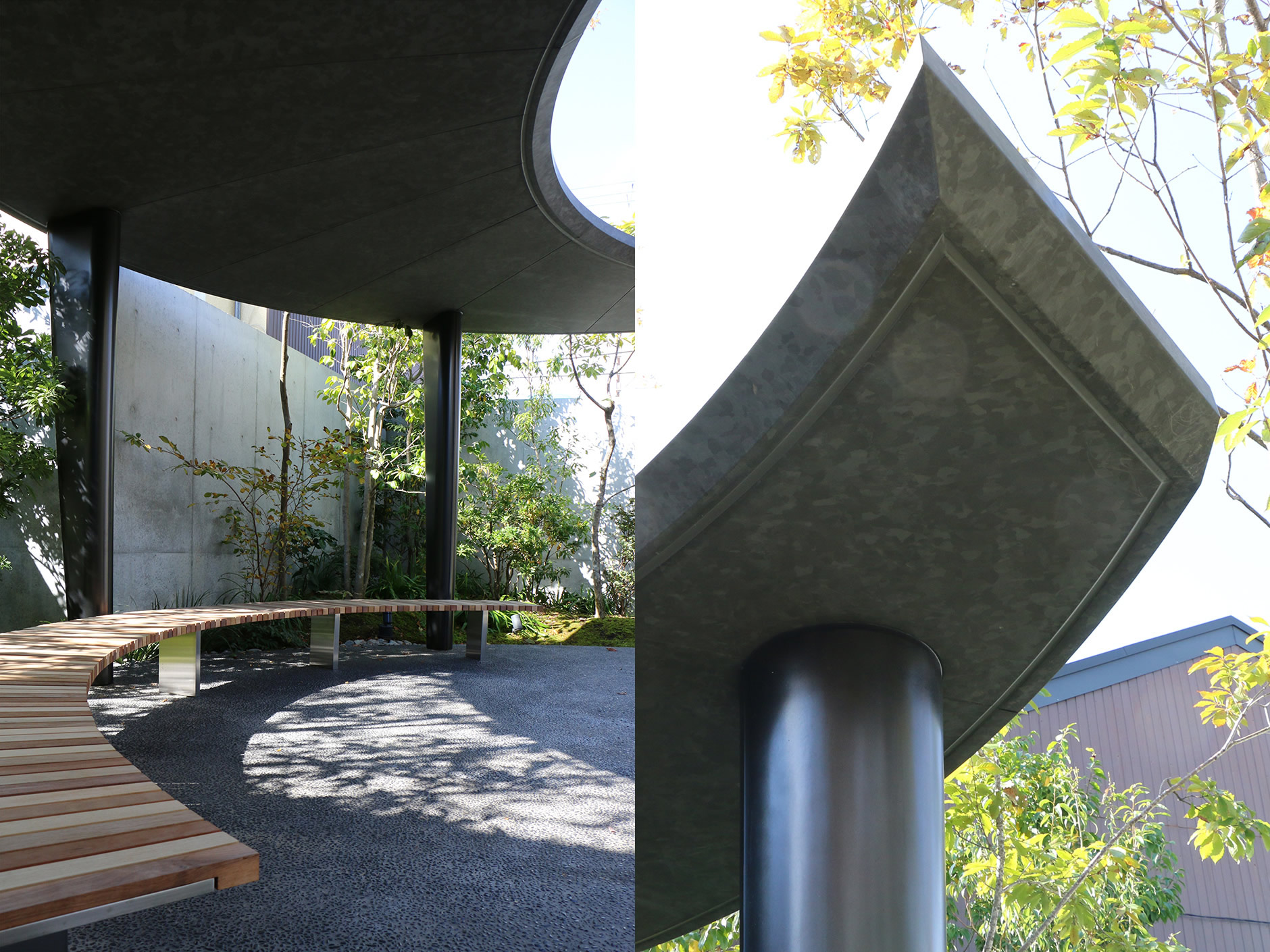 The temple was founded in 1495, and has a 524 year (as of 2018) history.
Sakai City’s designated cultural property “Jiho-Shaka-Nehanzu”
Memorial tower for Ono Dokensai Harutane, samurai commander on Lord Toyotomi’s side.
Grave of Kazama Rokuemonnojo, the magistrate who divided the town into blocks

He designs spaces for industrial facilities such as restaurants and shops, and a variety of interiors and architecture. He’s known for his ability to explore the universal in terms of the moment’s trends, without being bound by style and principle.

Born in Osaka, in 1958. Founded infix design inc. in 1989.
Professor of Design, Osaka University of Arts
Lecturer for the Design Faculty, Kyushu University